On December 31, 2017, Bitcoin was trading at over $13,000.  This represents over 1000% increase in price from the beginning of 2017.  To say that this is causing tremendous interest in many segments of the market is an understatement, but what is even more interesting is its underlying technology, the Blockchain.

What is the blockchain?  At a very simplified, high level it can be thought of as a distributed database that maintains a list of records in blocks that are chained together in a specific order.  Each block links to the history of the block that came before it, stamped with the time that it was created.  The linking of these blocks to form this continual record is called “Blockchain”.

There are specific characteristics required to have a blockchain.  It must be open and transparent.  That is, all who participate on the blockchain need to be able to see the full history of the records that are stored there.  It must be decentralized and distributed with each participant in the process able to see all of the records that are part of the blockchain.  This creates trust among the participants without having to have a central intermediary as exists in many of today’s structures.  It also allows for the storage of the same copy of all the records in multiple locations, so there is no single point of failure.  There needs to be a consensus mechanism (validation process) to validate the records that are added to the chain.  This allows for immutability of the transactions.  Additionally, it needs to be totally secure.  This is accomplished through cryptographically secure public and private keys.  This authenticates those entering transactions and eliminates the need for a central administrator.  The following diagram illustrates this. 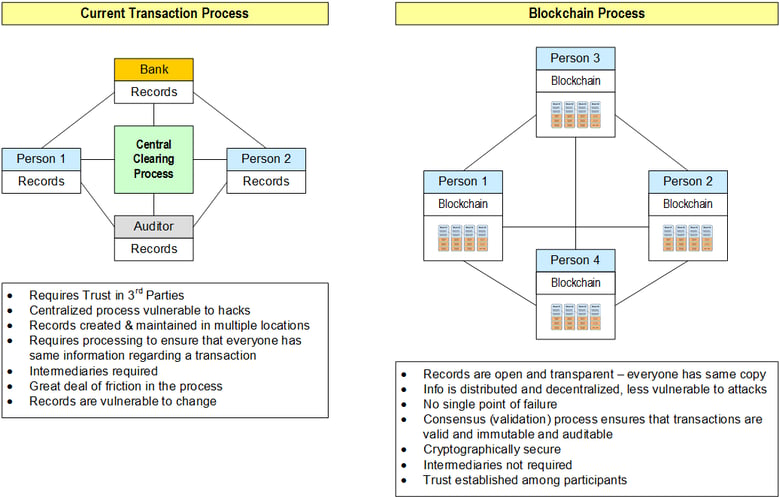 The critical aspect of the blockchain is that the entire end to end network is encrypted.  There is unique encryption on each transaction within the block and on each block itself, making it very difficult to tamper with or falsify.  A blockchain is maintained by an ever-increasing network of computers or nodes on a global basis. These nodes continuously communicate and coordinate to make updates to the chain as new transactions happen.  To add a transaction to the chain there must be an agreement process regarding what is being added.  This is called a consensus mechanism, which allows the transaction to be validated and then added to the blockchain.

Both new and existing companies are creating applications using the blockchain.  These will allow users to control their data and their digital identity, rather than today’s system of centralized third parties controlling the process.  The beauty of the blockchain is that the data that is stored on the blockchain is the same globally on each of the nodes. This is accomplished through a consensus process that ensures that the information on the distributed blocks is the same throughout the network.  Because of this global, immutable, timestamped ledger of transactions, each person or organization can verify their records on the Blockchain.  So, instead of the centralized third parties, such as banks and financial institutions, that are used today, the blockchain uses a validation process based on an open, borderless, distributed, trustless consensus.  The consensus mechanism allows the parties entering into the transaction to trust the process and to be able to see the transaction that is created on the blockchain.

This decentralized, immutable ledger has tremendous potential.  Walmart is using a blockchain to trace food products through their supply chain.  This provides them with the ability to verify their origin and trace them through to their destination with a full record of the handling of the food items each step in the process.  Walmart is now able to trace food back to its source and follow its handling each step along the way to its destination.  Using the blockchain as part of the supply chain process has the following benefits:  it reduces fraud and errors; it improves inventory management; it minimizes shipping costs;  it decreases paperwork processing;  it identifies any issues that arise during the process; and it increases both consumer and supply chain participant's trust..

Everledger is a global digital registry for diamonds, which uses the blockchain to track the unique signature and ownership of diamonds, including their source.  Everledger has partnered with diamond certification houses and has classified over a million diamonds through this process.  Using the information that they posted in their blockchain ledgers, they were able to find an online retailer who was selling fraudulent diamonds.  This accounted for about 7% of the cataloged base amounting to approximately $750 million.  Everledger has expanded their work to include rough diamonds, in addition to the polished ones.  Additionally, they are including other items in their blockchain process, such as wine.  They have worked with the vintners to add hidden codes that map key characteristics of the wine to the blockchain.  This provides the full history of the wine including where it originated and its distribution.

Interestingly, the blockchain allows the formation of new companies that are disrupting companies that use centralized systems on the internet.  Some examples of this are Arcade City and Chasyr.  These companies have created blockchains that allow drivers to have full control over the rates that they charge and the amount they keep for themselves.  In this way they can be independent agents and not dependent on the central processes of Uber and Lyft.

Blockchains provide us with a lot of capabilities that don’t exist in current payment and other transaction processes.  They increase trust, accountability and transparency among the parties involved.  However, it is important to remember that they are not a panacea for all processes, and there are many aspects that still need to be addressed regarding them as we move to the future.  We will be addressing these in future parts of the series.

From Part 1: What is the blockchain?  At a very simplified, high level it can be thought of as a distributed database that maintains a list of records in blocks that are... END_OF_DOCUMENT_TOKEN_TO_BE_REPLACED

Blockchain Part 2: How to Thrive in a Data-Driven World

I'm picking this series up after setting it aside for a while.  A recap/reminder from Part 1. What is the blockchain?  At a very simplified, high level it can be thought of... END_OF_DOCUMENT_TOKEN_TO_BE_REPLACED