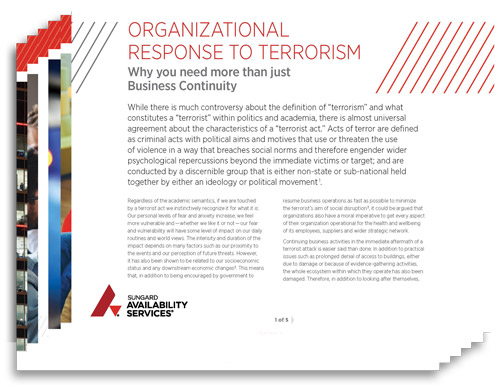 Continuing business activities in the immediate aftermath of a terrorist attack is easier said than done. In addition to practical issues such as prolonged denial of access to buildings, either due to damage or because of evidence-gathering activities, the whole ecosystem within which they operate has also been damaged. Therefore, in addition to looking after themselves, organizations should also pay close attention to their relationships to ensure that trust in them is not irreparably eroded and their position within their commercial ecosystem is not threatened.

While there is much controversy about the definition of “terrorism” and what constitutes a “terrorist” within politics and academia, there is almost universal agreement about the characteristics of a “terrorist act.” Acts of terror are defined as criminal acts with political aims and motives that use or threaten the use of violence in a way that breaches social norms and therefore engender wider psychological repercussions beyond the immediate victims or target; and are conducted by a discernible group that is either non-state or sub-national held together by either an ideology or political movement1.

Regardless of the academic semantics, if we are touched by a terrorist act we instinctively recognize it for what it is: Our personal levels of fear and anxiety increase; we feel more vulnerable and — whether we like it or not — our fear and vulnerability will have some level of impact on our daily routines and world views. The intensity and duration of the impact depends on many factors such as our proximity to the events and our perception of future threats. However, it has also been shown to be related to our socioeconomic status and any downstream economic changes2. This means that, in addition to being encouraged by government to resume business operations as fast as possible to minimize the terrorist’s aim of social disruption 3, it could be argued that organizations also have a moral imperative to get every aspect of their organization operational for the health and wellbeing of its employees, suppliers and wider strategic network.